All companies have stains in their reputations. You are bound to make mistakes in a company, but it depends on what you do after the mistake to revive yourself.

There have been many marketing fails in the past where we can learn a great deal from them. Today we will discuss 7 marketing fails and what each brand did after the mistake.

Many Adidas fans were mad with the poor choice of words, and the brand suffered a big hit from this mistake. The problem here is that you cannot undo this action once you send out a mass email.

You need to be very careful with what you put out there because these mistakes can go viral. Even if they had an option to undo their action and un-send the email, someone could have snapped a picture and posted it all over social media to make a bigger deal out of it.

You can’t undo some mistakes, so better be safe than sorry, even if it takes extra time to review the copy. A good way to stay objective is to imagine a million people from all over the world reading every word of your mass emails.

It is crucial to know other cultures so you do not offend them as well because something that is accepted in American may not be in China. With mass emails, try consulting with other people, from different backgrounds to make sure you don’t offend anyone.

In my opinion, this was the worst mistake a brand could make, and getting back up from this was extremely hard for Pepsi.

In 1992, Pepsi-Cola launched a “Number Fever” promo in the Philippines. The promo worked similarly to a lottery. There was supposedly one winning number on the bottle caps of the bottles. So you would have to purchase the soft drink to get a chance to find the winning bottle cap number.

On May 25, it was announced that the grand prize number for that day was 349. The problem was that there was a computer error that printed 800,000 regular bottle caps with the number 349. Now that meant that Pepsi owed a great deal of money to the “winners,” but they did not give the people the prize money they said they would.

This started violent riots, and many people boycotted Pepsi because they felt betrayed and deceived by the brand. The riots were so dangerous that citizens died at the riots.

A woman, Paciencia Salem, said her husband died of heart failure at a rally last year, and she said she is prepared to do the same. She said: “Even if I die here, my ghost will come to fight Pepsi,” she promised. “It is their mistake. Not our mistake. And now they won’t pay. That’s why we are fighting.”

It was a big deal because these people did not have a lot of money. The prize money was 1 million pesos which was a lot. So, if they won the lottery, they could help themselves get out of poverty.

People spent all their paychecks on Pepsi, families were broken apart to find these caps, housekeepers stole bottle caps from their bosses, and people looked through trashes for these bottle caps. This impacted 50% of the population since they were involved in the lotto.

The problem in this situation is that you cannot go back on what you promised publicly as a global company. Pepsi could have apologized for the situation and done something to give back to the community as a whole.

Instead, they offered 500 pesos ($18) to holders of mistakenly printed bottle caps as a “gesture of goodwill.”

We can take from this situation to always own up to our mistakes and learn from them to not repeat them. When dealing with a brand crisis, you should always aim to fix it in the best possible way rather than let it harm your company. For example, Pepsi could have donated a nice amount of money to help the country stand back on its feet.

This mistake resulted in plummeted Pepsi sales. On the contrary, Coca-Cola’s sales skyrocketed till today; people from the Philippines refuse to buy Pepsi products because it hurt their families. 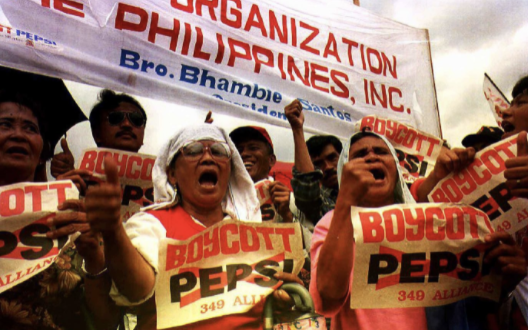 On a lighter note, back in the ’80s, Colgate thought it would be a great idea to make frozen dinners. However, people could not understand the connection between the ready-made meals and the toothpaste they have been using for years. “Colgate’s brand name symbolized toothpaste and its ability to clean the mouth with a minty fresh feel.”

The problem here is that Colgate tried something in a totally new direction that did not go as well as they thought because people thought, “Why would a toothpaste brand make frozen meals?” People just didn’t associate tasty food with a brand that had brought them products that belonged in the bathroom medicine cabinet until that point. Consumers did not buy frozen meals because they could not associate a toothpaste brand with meals.

What we can take away from this story is to focus on what you’re good at. If you’re branching out in a totally new direction, think about separating your branding and marketing for the different products.

If you are good at a specific thing or product, don’t try to do something completely different from your expertise. Instead, work harder to improve what you are already good at. If you are trying something new, make sure to try it on focus groups beforehand to get a reaction from your audience. 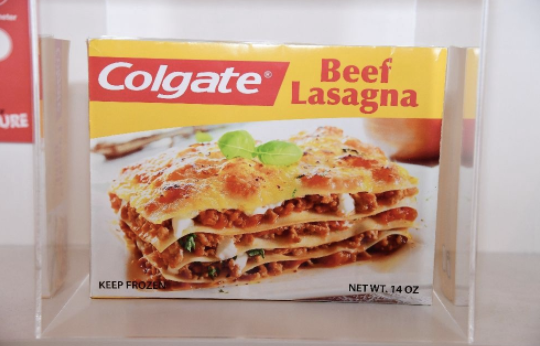 People declared they were boycotting Starbucks because the cups did not contain any Christmas-related messaging, and were perceived by the public as ‘anti-Christmas’ cups.

Starbucks attempted to change the design a few times until they found a design to satisfy their consumers. It created a lot of controversies, and people did not want to buy from Starbucks because they were not spreading the holiday message.

It provided PR that no amount of money could buy, though it came with inherent risk. No matter how many times they changed it, people were not completely satisfied.

We can learn from this that it is important to listen to your consumers but to always stick to your beliefs. Starbucks has attempted to fix the cup designs many times, and people were still not completely satisfied. Sustain your brand-building process by keeping true to the message your particular branding supports.

Victoria Bitter changed their beer flavor in Australia when it reduced the alcohol content from 4.9 to 4.6 and sales PLUMMETED. This is similar to what happened to Coca-Cola when they made the new Coke.

Consumers were so disappointed when the new Coke formula came out because they missed the original taste. After many riots and boycotts, Coke brought back the original Coke, and consumers started buying numerous packs at a time just to be safe.

Luckily, Victoria Bitter was aware of their consumers and sent out a letter saying, “We’ve heard you… and were fixing it.” This was the best thing that the brand could have done to save its reputation because they listened to their consumers.

What does this mean? Consumers love ORIGINALITY! What we can learn from this fail is that many consumers do not like a change, especially when they have been doing the same things for years. Consumers like originality rather than something new, especially when it has been a long time.

The reason people love originality is because of nostalgia. Imagine you grew up drinking Coca-Cola with your father, and then you had kids. You would want to share this exact experience with your children so they could be a part of your childhood. 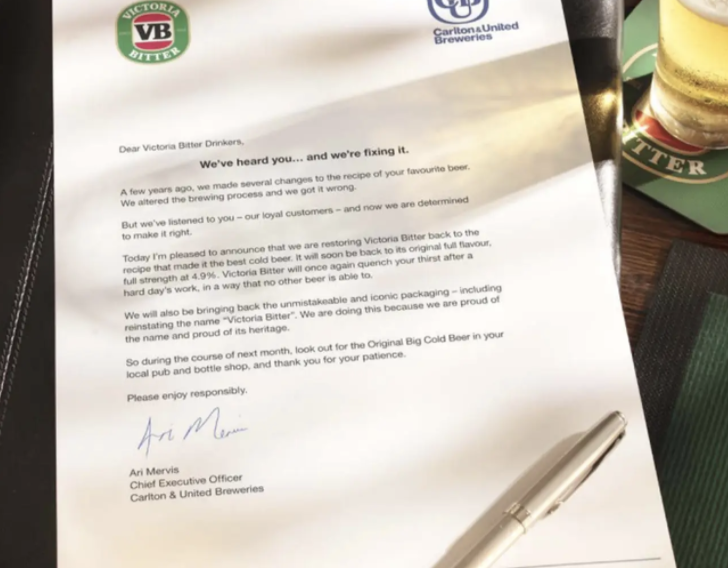 I think that this failure was very silly. Unilever’s Dove sold limited-edition packaging of its body wash in the U.K. designed to resemble different female body types.
The effort is meant to celebrate different types of beauty as part of Dove’s long-running “Real Beauty” platform and is being promoted with the hashtag #RealBeauty. The only problem is that the reactions completely backfired because consumers did not like the new packaging. To be fair, it is not Dove’s place to talk about body shapes since they are a soap company. Body figures are a very sensitive topic, which is why they should not go into it. In a way, they were saying that people say your body is different, “but we don’t, we accept that people come in different shapes and sizes.”

The campaign had received heavy backlash on social media and Twitter, in particular. One tweet said:@Dove matches its new body wash bottles to your body type. Much of the criticism suggested that comparisons to bottles of body wash are unflattering or ridiculous regardless of body shape. As a brand you need to be very careful when changing something like the product packaging. It can be useful to consult with influencers and focus groups beforehand. The reasoning for changing product packaging should have a valuable reason that should not offend your consumers.

This is by far the funniest marketing failure. In this story, Dominos pizza had a campaign that offered 100 years of free Domino’s pizza to anyone who got a tattoo of the company logo and shared the image on social media. Quite predictably, Domino’s then got a slew of images showing their logo tattooed on people’s legs, arms, and pretty much anywhere else, prompting the company to end the campaign early. Soon enough Domino’s sent out an urgent update, warning people about to get tattoos that their permanent ink may not end up being worth it after the new cutoff date. “They stuck to just 350 lucky free pizza winners, — fully taking advantage of the offer ended up costing Domino’s a pretty penny over the years.”

What we can learn from this case is that you must know your customers. Most likely, the company didn’t dig into their audience well enough. And certainly, they didn’t realize just how far people would go to get free pizza for life. 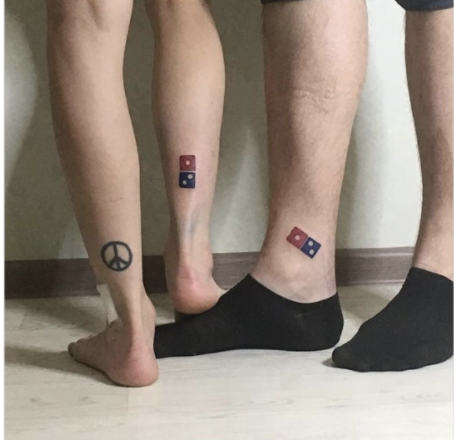 Even though all these cases are different they are all similar in a way. There is a lesson to learn from every mistake and failure. If a company does not do anything about its mistakes it will harm the brand. But if the brand has a comeback and responds differently to the situation then they will be left with a positive brand image.
All the stories fall under “Crisis Management” processes. Ideally, a brand will do all the necessary actions to prevent a crisis but it’s inevitable at some point to deal with failures.

The way a brand deals with a crisis is crucial to its reputation. Everyone makes mistakes, people get it, but if a brand tries to lie or manipulate, it will do even more damage.