In the series of guides ahead, I will teach you how to build your own funnel in Google Analytics 4. Even if you don’t have Google Analytics 4, and even if your technical knowledge isn’t up to par – I will explain to you step by step what you have to do in order to build your own wonderful funnel and analyze the behavior of those browsing your site.

First of all – what’s so special about a Google Analytics 4 funnel?

One of the features I love most about GA4 is the flexibility and ease that it affords to build a funnel.  In Universal Analytics, the only option for building a visual funnel that displays where users left the site was via page views.

We had to create a goal and enter the list of pages in it that users have browsed through. 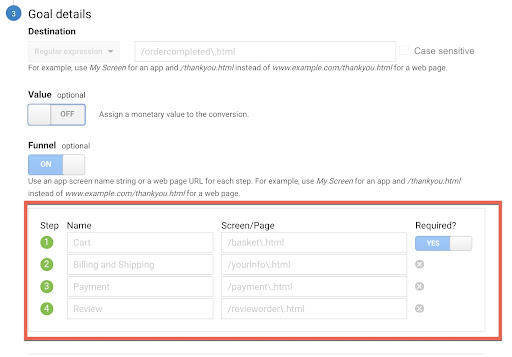 If the user would execute a funnel of an event (for instance, by clicking on something, by filling out the first part of a form or the second part of a form, etc.), they’d have to bend over backward in order for it to be possible to build a visual funnel from this.

This is what a funnel looks like, by the way, in case you don’t remember: 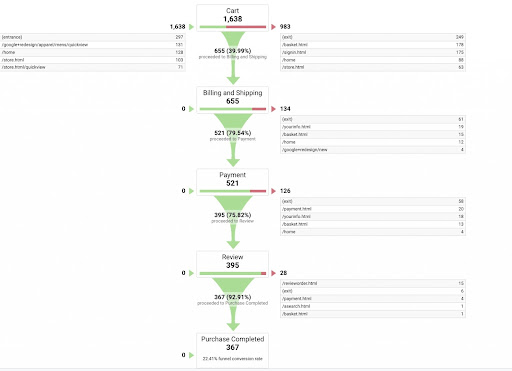 The funnel itself was very limited as well, because, for instance, if you’d have wanted to distinguish between a mobile funnel and a desktop funnel, it wasn’t possible (at least not in this report), and this report is generally very basic in contrast with what’s possible to do with a Google Analytics 4 funnel.

In Google Analytics 4 it’s possible to build an enhanced funnel and analyze it with maximum flexibility.

Here’s a funnel, for example, that I created on an eCommerce site.

Step One: All those who entered the site.

Step Two: Those who entered a product page.

Step Three: Those who added something to the cart.

Step Four: Those who filled out their shipping details.

Step Five: Those who filled out their payment details.

Step Six: Those who completed their purchase.

Notice that some of the steps are based on an event (for instance, adding something to the cart), and if I had built this funnel in the old Universal Analytics I wouldn’t have been able to use them.

In any case, you can see that due to the fact that the number of people that entered the site and viewed a product page is significantly higher than those who added something to the cart or executed one of the remaining steps, the proportions of the funnel don’t allow me to see the discrepancies between the columns clearly, and I, therefore, execute a small step that we’ll learn further ahead, and this is what happens:

Notice the wavy line that appears on the two columns on the left – this tells us that Google Analytics has “cropped” them, and this enables me to clearly see the discrepancies between the last four steps of the funnel.

Another convenient option is to add a breakdown and see the transition between the different steps of the funnel for every one of the parameters that I’ve selected (in this case – a desktop device/mobile device/tablet): 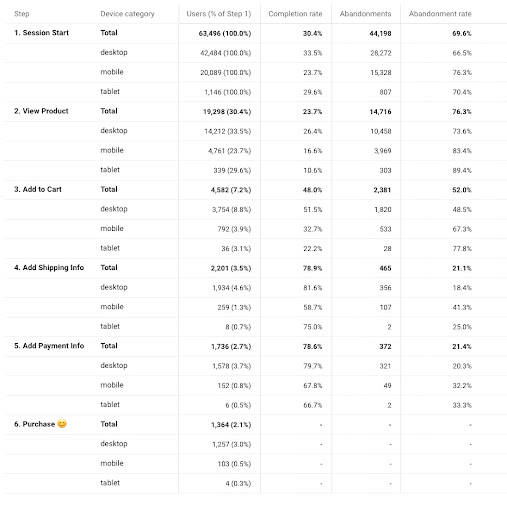 I can also add the time that has elapsed between each and every step (for every one of the segments). 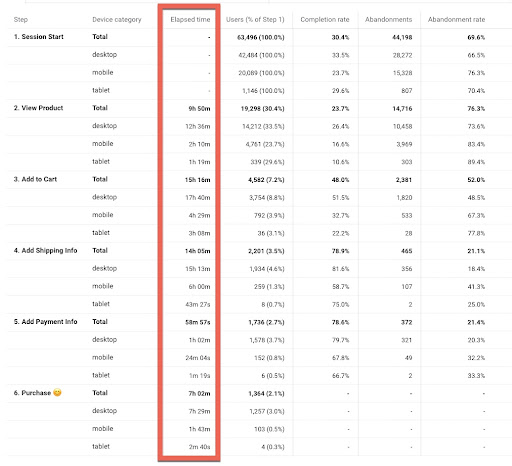 I can do it in a slightly different way and see the differences between mobile and desktop (or any other segment) in a visual format.

Or to see the overall trend of the funnel on a time axis chart (for instance, whether or not there has been a period of time when more users transitioned from one step to another, in contrast with another period of time):

In short, that was just a small showcase to help you understand how many options will become available to you if you build a funnel using Google Analytics 4.

The goal of this guide is not to tell you exactly how to do it, but rather to bring it to your attention and make you want to have this great funnel from Google Analytics 4 for yourself.

But how do we create the funnel?

In order to create the funnel, there are a few preliminary steps that need to be taken.

Don’t worry! I’m going to show you exactly what to do in the following guidelines, but for now, I just want to give you the basic summary.

In order to analyze the behavior of site users, you don’t need to use a funnel, but it can be a very convenient option for observing the processes of a number of steps that could happen one after another, and to see where the users are most likely to leave the site before it actually happens.

In this series of guides, I’ll show you exactly what to do in order to build your own funnel, even if you don’t have any knowledge or experience with Google Analytics 4 or tag manager.

If you didn’t get to this page through my newsletter – I recommend that you sign up on this page here so that you could receive all of the guides.